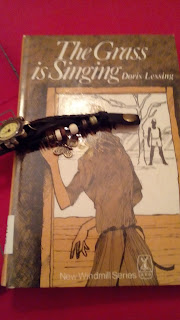 Doris Lessing was rewarded with the Nobel Prize in 2007. "The Grass is singing" is her first novel. The main character is Mary and her interesting but also tragic life.

At the first sight Doris Lessing impressed me with her writing style that flows as a nice river. The first part of the book presents Mary' s life as a young lady. Her past was tragic enough for her to search for a better life. So, she manages to become an independent woman. She has a good job, good friends, both men and women. She has good social life and seems to have a good destiny.

But, as în real life, things happen. She is thirty years old but she has no plans to marry. The men she has as friends consider her a sister and, in the same time, she will not marry. She does not want to have her mother destiny: living with an alcooholic and fighting  with the troubles the whole life.

One day Mary hears a conversation in which she is the subiect of her friends jokes about her useless life and her lost chances to marry. All that affects her deeply and she decides it is time to make a change.

She meets a farmer in the city and after a while she accepts to marry him without even visiting his house. When this does happen, she is really shocked by the house condition and the poverty that could be felt everywhere. She is deeply dissapointed but decides to go on and also to make that place look like a more pleasant home.

She makes the house more pleasant, she forgets about her romance books she broght with. They did not seem attractive anymore. It is a tragic change in her, in my opinion because she gives up on the life she fought so much for and begins to enjoy the countryside and tries hard to fit in.

The period described in the book is that when black people we were used in farms as servants. Mary has great difficulty in getting on with the servants, she dismisses them after a few days. Her husband makes her accept a black servant that seemed better.

In time Mary develops a strange relationship with this black servant and she is killed by him, a day before they decided to leave the farm for a while.

Mary realises that she became as her mother. She had no real life, all her ideals were lost somewhere in the way. Her husband proves to be a very unlucky farmer. They lead a poor life, he gains nothing with the farm.

She escapes in the city one time but her former boss does not accept her, seeing what she has become. In the end she lives in her own world and slowly loses the sense of reality, not realising what her relationship with the black servant has become.

My own interpretation of the book title is that in the moment Mary accepted her faith as a farmer wife, she has accepted also the nature and that could express somehow the song of the grass.

It is a book full of sensibility. One cannot avoid feeling sorry for Mary and get angry for her decisions. One novel worth readind and meditating on.